Welcome to a new school year!
It has been so nice to see some families as we are getting ready.  The building is looking great, as always a BIG Thank You to our Secretaries Mrs. Ward and Mrs. Lacroix and our Custodians Mr. Riviera and Mr. Thomas for all they do!  We are excited to get back!  We welcome Mrs. Russo who will be teaching our fourth Kindergarten class this year.  She is coming from Hamilton Elementary after teaching first grade for a few years.  We also welcome Mr. Scott back teaching First Grade PE classes and Adaptive Physical Education.   We continue to grow implementing Bridges Math in Grade 2 this year.  We also are expanding to IXL an online differentiated program for literacy and mathematics in Grades 3-5.  We have had additional security updates in the building this summer and across the district.   Principal Hitchener

Mrs. Carlton and I are planning to run a school-wide Art project in the fall to create a colorful painted rock border at the front entrance area.

We look forward to having some fun with this!  Thanks as always for your support!  We are also seeking donations of brown bags and smocks (all sized T-shirts and/or button down shirts) for the Art Room.   Thank you, Ms. Hitchener and Mrs. Carlton

I hope you had a wonderful Labor Day!  Mine has been full of some of my favorite things which include outdoor sunshine relaxing, fresh corn on the cob and pie, feeling accomplished as well as pride for helping out another!  I am SO excited to start tomorrow for Grades 1-5 and then start and Wednesday full day for Kinders!  Get your camera ready it looks like another beautiful day ahead! If it was raining, which it looks like we will have later in the week, we meet grades K-3 in the Gymnasium and 4 & 5 in the Cafeteria.

I can't wait to see everyone back together again.  Mrs. Ward says it best "Summer at the office is the quietest time, so it makes it even more sweet when we are back together!" We are here for those of you in need but please understand there may be a wait for things as we respond to everyone and follow safety protocol. Our calendar for September is below and attached and will be updated and forwarded as things change.  Don't forget to complete the BCI requirements for volunteering and participating in field trips (this process can be lengthy).  STAR is our Fall Spring Screening Assessment in Reading and Mathematics for grades 2-5, K & 1 use Aims Web.

Please don't forget to complete back to school paperwork in the new workflows in your Aspen Family Portal.  The Grade 4&5 Chromebook Agreement needs to be signed by 9/11/17.  Your child will not receive a Chromebook until this is completed on Aspen.  Use the link below to view a short tutorial on the two new workflows in addition to the workflow you have used previously.  If you need assistance with your Aspen credentials, please contact the our office directly at 268-6540.  The office clerks, Mrs. Ward and Mrs. Lacroix have access to view account credentials or reset the password.  Additionally, there is a self-recovery on the login page for forgotten passwords.

We are off with a new school year!

Tutorial on new Back to School Workflows in Aspen

I very much hope you are enjoying this beautiful summer weather!  I have been busy getting summer projects underway like the Cafeteria being repainted. Just a reminder there is no power at Stony for the next few days and no one will be in the office until Friday this week and Wednesday the following week.  Happy Fourth!

Please join us Mondays from 8-10 am to help harvest the Stony Garden!  It is exciting how much is going on in there!  Sugar snap peas were harvested this morning!  Improvements are occurring daily. Please let us know if you are interested in helping.  We have had some trouble with people eating our produce. As you know this gets donated to the Food Bank! We are looking at clearing the classroom space and putting down turf to help rid us of ticks naturally and uniform the space for functionality.  If anyone can donate turf or help in any way, it would be greatly appreciated!

I updated our website with the summer reading resources, supply lists and dates...  We will be moving to a new website sometime this summer.  Stay tuned for more information. NK Staff are voluntarily reading Mathematical Mindsets by Jo Boaler.  I am participating with a few Stony Teachers.  Please let me know if you would like to join us. My signature has a nice reflection from the Introduction.  Quick video on purpose: https://www.youtube.com/watch?v=sLPFaOvhlKw

We are currently interviewing to replace Mr. Laramee PE/APE because he will be moving on to NKHS. He will be sorely missed as well as Mrs. Mang!  We wish her the best of luck as she moves on and we thank her for her dedication this year!  We welcome Mr. Dwyer who returns from WMS to our Music position!  Best wishes to Mrs. Curzio and Mrs. Dyer! 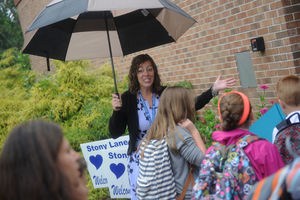 Two new principals in North Kingstown were as eager as the students for the opening bell to ring Sept. 6.

Mary Ellen Rossi, principal of Davisville Academy, and Nicole Hitchener, principal of Stony Lane Elementary School, each have years of educational experience and said they look forward to helping their schools continue to improve.

“My hope for this year is to work with my staff, families and students to create a community of learners here,” Rossi said, who replaced Karen Skerry at the two-year-old school that serves special needs students. Skerry resigned in June. “A community that’s welcoming to those who need it and also supportive to those who have come through the program and are ready to make that transition back to their home schools.”

“I want to continue the positive environment that is here already and build upon that,” said Hitchener, who replaced Ed Ferrario, the 2014 Rhode Island Association for School Principals’ Elementary School Principal of the Year, who retired last year.

Rossi previously spent 10 years in the Cumberland School Department, the last two as part of a principal internship, and was dean of special services at Achievement First Mayoral Academy in Providence. She has been drawn to special education her entire career, but it was during the principal internship Rossi grew to love being an administrator, working with educators to improve how children learn and working with the parents, she said.

“As a school administrator, I really wanted to hold onto both of those roles,” Rossi said. “So I felt like Davisville Academy is the perfect hybrid of working in the administrative role; working with the adults working with children, and also with the special education component.”

Rossi said she met with staff and parents to learn what was successful last year and where gaps could be closed. The school was created in 2015 to serve special needs students who would otherwise be sent to out-of-district placements.

[We want to] make sure everyone is feeling challenged, yet comfortable and satisfied with the process and program here,” Rossi said.

Hitchener spent much of her 20-year career in Coventry as a special education teacher – primarily at Washington Oak Elementary School, she said. For five years, she was a professional development coordinator, working with teachers on how to differentiate instruction, how to intervene with struggling students, and how to support all students. After receiving her administration certification, Hitchener was principal at Blackrock Elementary School for a year and loved it, she said.

“Stony Lane was a dream because there was so much organization and structure to this district,” Hitchener said. “The building is a [National Blue Ribbon School] and Ed Ferrario was Principal of the Year, so I knew great things were happening here. I felt like I could continue that and move that forward, so I applied and was so graciously happy to accept [the job].”

Hitchener said the school is preparing for its Chromebook rollout, with students in Grades 1-5 getting a notebook computer to use at home and in the classroom, while kindergarten students will receive iPads. Teachers and staff participated in a tech summit before classes began to help prepare for the change. Hitchener said she also worked with Ferrario over the summer and met with families and staff before classes began to ease the transition.

Hitchener said one focus would be improving scores on the PARCC English/language arts assessments for Grades 3-5, which slipped last year.

“Writing is an area that kind of brought down the scores across ELA,” Hitchener said. “We want to target that area and do some strategies and focus our instruction on that so we can come back up to where we’ve been in the past. With PARCC and Common Core, we need to make sure we’re meeting those demands.”

It is with great pride and excitement that I write this letter of introduction to you as the Principal of Stony Lane Elementary School! It is my privilege and honor to join the Stony Lane School community.  I am looking forward to an exciting year getting to know all of the Stony Lane students and working with you, the parents and community members in North Kingstown.

I began my educational career 20 years ago in Coventry.  I was a Special Education Teacher at Washington Oak Elementary School for 13 years working with all grade levels.  I have also been a Professional Development Coordinator for 6 years in Coventry working with a variety of schools Pre K-8. In the last few years I was supporting blended learning!  I recently left a Principal's position at Blackrock Elementary School after the previous principal returned.  This positive experience was of a similar student size and grade levels!


I live in Richmond with my partner Christopher and my dog Tungsten!  One of our favorite things to do is go mountain biking!  I have thoroughly enjoyed my recent break this summer!  Beautiful beach weather and time to complete some needed home projects!  I have also begun to prepare for this exciting year by transitioning with Mr. Ferrario.  This has been an amazing experience for he is a natural mentor and I can’t thank him enough for his insight!  We are sad to announce that our Librarian, Sue Lynch, has accepted a position at The Metropolitan Regional Career and Technical Institute in Providence.  She is excited to start something new but will miss us very much!  We feel the same, wish her the best in all ahead and know she will succeed in anything she puts her mind to!  Thank you both Mr. Ferrario and Mrs. Lynch for all you have given to Stony Lane and North Kingstown!  I have had the wonderful opportunity to meet with PTO members to learn and prepare for upcoming Stony traditions! Thank you for the fun Kinder footprints to help guide them on their first day!  Families please see below for upcoming important dates!


My goal as Principal at Stony Lane is to ensure the safety and success of each student, every day!  We are thrilled about our Technology initiative with students in grades 1-5 being issued a Chromebook!  Students in grades 4 and 5 will be able to take them home.  All students grades 1-5 need to complete and return the Chromebook agreement!  Our Kindergarten students will have access to new iPads!  More information can be found here: https://sites.google.com/a/nksd.net/nksd-chromebook-1-1-initiative/  I will work hard at improving our blended learning experiences!  I am excited to continue the Playworks Playground initiative as I was also trained last year!  We will be having recess before lunch for all grades and wipes are part of our new process to keep things sanitary!  As of August 15th DreamBox Math will no longer be accessible for all students.

I look forward to our exciting year ahead!